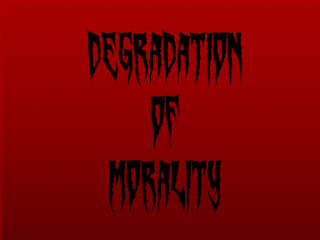 It is a widely spread belief that Anambra people have a pronounced concept of morality and ethical values. Attempts have also been made to show how this can be maintained through the available agencies that are related and concerned with the life of the people. Moreover the moral sanctity of Anambra people has degenerated to an abysmal level thus.

Immodest dress is a type of dress that attracts unusual attention to an exposed body especially of women. Immodest dress has always been sinful in the sight of God. According to Gen 3: 1-21 the Bible observes that when Adam and Eve’s eyes were opened to sin and shame they realized their nakedness and made for themselves aprons of fig leaves and covered their loins and hid from God. But those little aprons they made for themselves, which probably covered up more than many popular swimsuits of today, were not enough to satisfy God. Women are no longer modest in the name of fashion which has affected the level of morality in Anambra.

Onoyima (2006: 7-8) observes, and lists the scandalous dresses which has shown the degenerated level of morality. These are: “leggings, hip stars, hug-me/half-cut, Kiss-me, Onu – gbajie – boys, Onitsha – show – your – back, show – your – chest – parade – blouses, off – shoulders, spaggetti, blouse/gowns, see-through- air-condition-dresses, sleeveless gown/blouses, one hand blouse, fish blouse, fly over, body hug, short gowns, half “ori – okpa – “trousers, half – neck blouses/gowns, short/mini fish skirts, gate-way, indomi, imalu ndi anyi bu, Ala (madness) Yiba boys/ikam anyi ara, show chest blouses and so on. The aforementioned scandalous and sensational dresses were some of the key factors that lowered our moral sanctity even in Anambra. It promotes immorality and rape.

Fornication is a term that typically refers to consensual sexual intercourse between two people not married to each other (Wikipedia the free encyclopedia). For many people, the term carries a moral or religious connotation. Fornication is regarded differently by various religions, societies and cultures. Fornication is often used as a blanket term to encompass all sexual activity outside of marriage and even sexual thoughts (i.e. sexual lust/fantasies) that were considered unrighteous by the Old Testament laws of Leviticus, including incest, bestiality and “lying with a man as with a woman” (i.e. homosexuality). Fornication is one of the degenerating factors which has rendered Anambra immoral today. So, it is common among Anambra people.

Wikipedia, 2019 defines stealing as the name of a statutory offence in California, Canada, England and Wales, Northern Ireland, the Republic of Ireland and Victoria. The word is also used as an informal shorthand term for some crimes against property, such as burglary, embezzlement, larceny, looting, robbery and shoplifting, fraud and sometimes criminal conversion. In some jurisdictions, stealing is considered to be synonymous with larceny. It is one of the degenerating factors of morality in Anambra because once what you collect is not yours; it amounts to stealing.

*For Complete Material, comment below or contact info@funaiwhistle.com; Chat up on whatsapp on +2348167788957. All materials and full docx format and editable. Available in google drive.

Moral life has degenerated among Anambra people from what it used to be in traditional times. This has been discovered to be as a result of some degenerating level of morality which is due to technological innovations that have forced them to adopt mechanisms that are considered to be immoral. Other causes include economic deprivation, frustration from society, misuse of information obtained through modern means of communication among others. The government and the society at large have roles to play. Thus, all hands must be on deck to restore Anambra back to its glorious former glory.

The following recommendations are made to revive the degenerating standards of morality in Anambra Community:

*N.B: References are properly formatted in the docx file in APA format.

A Review of the Book History and Philosophy of Science by Joseph O. Eneh

PEACE AND CONFICT STUDIES CONTRIBUTION TO ACHIEVEMENT OF GLOBAL PEACE