Today we begin a new section on this blog titled: Do You Know (DYK). This section will be dedicated to enlighten the readers of this blog on updates and happening in the scientific/technology world as we now know it.

Today, Introducing: Do you Know the 5 Deadliest Elements on Planet Earth

The elements that most of us begin to learn in middle school are pure substances that are formed by the same type of atoms, which cannot be separated into simpler and different substances by physical or chemical means. This gave us the opportunity to create and use elements that we naturally cannot reach or use. A scientific discovery of an element began in 1649 when German alchemist Hennin Brand discovered phosphorus. The element phosphorus is a vital component of cell content in living things. It is very important especially for nerve and bone tissues and in the absence of joint and muscle pain; It is an element that can cause problems such as weakness and weakness in bones. However, its excess can lead to heart diseases.

In other words, an element like phosphorus has benefits and harms for us and our environment as organic creatures. Likewise, although we make use of elements in every aspect of our lives, including daily, technological and scientific, some elements pose a great danger to us. As I mentioned before, it is very important that we know the true potential of the elements while human beings have been working on new elements for years.

In this article, I will talk about some of the deadliest elements in the world. If one day you come across one of these elements, I suggest you run away without looking back. 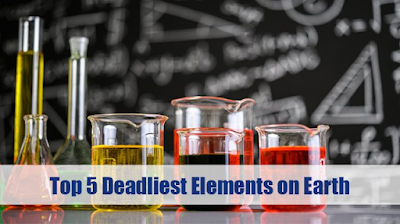 Polonium, a very rare and extremely radioactive metal, is a highly dangerous element that does not have stable isotopes. If you touch the polonium with your bare hands, the element will not kill you, as it cannot move far into your skin. However, if you smell, drink or eat something that contains even a tiny bit of polonium; So if you take polonium into your body in any way, unfortunately, death will be certain. Your organs will fail and your body will start to shut down within minutes. An additional note: even a cigarette contains trace amounts of polonium. I guess polonium is one of the reasons why smoking is so harmful, isn’t it?

Polonium, on the other hand, was discovered by famous physicists Marie and Pierre Curie in 1898. This element has even been used by governments as an “assassination weapon”, although Marie and Pierre risked their lives in their experiments on polonium to expand human knowledge of radioactive substances. Polonium is such a radioactive element that it makes it difficult to study. It’s so strong that 1 gram of polonium emits as much as 5 kilograms of alpha particles of radium. This means that 1 gram could kill 10 million people if swallowed. It must be said that polonium is even more deadly than plutonium.

Highly produced and used in weapons, spacecraft, defense industries, and nuclear weapons, plutonium is the world’s most toxic element. It is the element from which the atom bomb (Fat Man) dropped at Nagasaki was made. This element, which is toxic and radioactive in all its isotopes, kills it from radiation before contact. Even the contact of microgram amount to any wound on the skin causes cancer.

Plutonium particles are lightweight and can be suspended in the air. As this facilitates breathing, it causes permanent damage to the lungs, organ failure, and death. It emits consistently high levels of alpha, beta, and gamma rays. If 500 grams of plutonium is inhaled or ingested, it can cause 2 million people to die. Plutonium is oxidized in the air. It can produce a great image before dying from high radiation (bright amber) but the consequences will be very serious. For this reason, plutonium experiments are carried out with great care.

Mercury, which has been used as face paint and make-up material throughout history and is believed to prolong life and is called the “elixir of life”, is actually a highly harmful and toxic element. I’m sure your parents also said that if the thermometer in the house breaks, you should not touch the liquid inside. Even if we get trace amounts of mercury from seafood, this amount is often at the level that our bodies can handle.

However, it should be noted that many tourists (and Japanese) who go to Japan, a seafood paradise, experience mercury poisoning. Mercury is a nervous system toxin in which even a small amount is very effective. Its poisoning causes a lack of coordination in the body and weakness in the muscles. It even causes memory loss, speech and vision problems. If the patient is not intervened, poisoning results in death. 1 gram of the element is quite enough to create these effects. It is especially dangerous to smell. Due to the structure of the element, it is very easy to get into the air.

Arsenic, a metalloid used as the venom of choice for kings and queens at the time, causes severe poisoning in areas that lack clean water and where groundwater is used. Symptoms in this type of acute poisoning are nausea, diarrhea, vomiting, burning in the mouth and throat, and severe abdominal pain. Since it is also found in insecticides and medicated fruits and vegetables, arsenic accumulates in the body when inhaled or in the consumption of such foods, causing long-term poisoning.

This is called chronic poisoning. The chronically poisoned individual is gradually debilitating, disorders in the nervous system begin, tumors may occur in the skin (cancer in some chronic poisonings), and the condition results in death. However, arsenic is also used in the treatment of some types of cancer. The reason is that arsenic can attack cancer cells and render them ineffective.

Additional information: Although the cause of Napoleon’s death is said to be stomach cancer, there are thoughts that he may have been poisoned by the arsenic found in his home wallpapers and his symptoms indicate this.

Lead is around us, in everything we use in our daily lives. One of the oldest metals in use and a highly deadly toxin. This element, which is used in jewelry, building materials, and paints, is an alkali metal. So much so that even a little prolonged contact with any substance that contains sufficient lead can lead to lead poisoning.

If lead enters your body (through eating or drinking), it will starve and kill your cells by tricking your cells into having one of the metals they need (such as iron, calcium, and zinc) – yes, by fooling them. Lead poisoning, known for its terrible effects on the nervous system, leads to serious problems. It causes growth disorders, mental development, and organ damage in children. It has been found that it reduces the fertility rate and causes aggression in the long term.