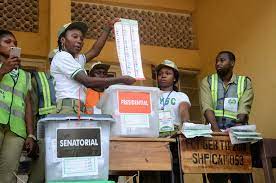 CHAPTER ONE
1.1 INTRODUCTION
Social media have become a natural part of everyday lives of people all over the world. In the past few years, social media have shown a rapid growth of user counts and have been object of scientific analysis (Wigand et al., 2010; McAfee, 2006). For example, more than 800 million people worldwide are members of the facebook network (Facebook 2011) while twitter counts more than 200 million accounts in total (Huffpost Tech, 2011).
The arrival of these social media platforms have continued to change the way people communicate with one another around the world. For example, mobile phone penetration rates, in particular, have resulted in a plethora of ideas for new media platforms aimed at bridging the information divide between the well-connected and the disconnected (Unwin, 2012, p.7).
The place of social media on Nigeria’s electoral process is no longer in doubt. To advance the political conversation and mobilize political supports, down to reporting updates right from the polling boots on election day, social media has become a critical political tool for campaign planners. The 2011 general elections in Nigeria arguably marked a significant milestone in the use of social media for political communication in the country.
Even the Independent National Electoral Commission (INEC) and civil society organizations made extensive use of social media during 2011, 2015 and 2019 elections in Nigeria. This stakeholder used the social media to achieve a number of interrelated objectives.
Based on the foregoing, social media platforms have fundamentally aided political communication in Nigeria and has played a significant role in the success of any election held in Nigeria starting from 2011 till date.
Democracy is widely acknowledged as the best form of government in most parts of the world today.
Elections, which represent the most modern and universally accepted process through which individuals are chosen, represent a body or community in a larger entity or government is one of the cardinal features of democracy (Nnadozie, 2007).
This is so because in a democracy, the authority of the government derives from the consent of the governed. This is perhaps why democracy is commonly referred to as “the government of the people by the people and for the people”. Usually, a democratic election would characteristically be competitive, periodic, inclusive, definitive and free and fair (Chukwu, 2007).

THE ROLE OF SOCIAL MEDIA IN MOBILIZATION FOR ELECTORAL PARTICIPATION