Complete Summary Of Echoes Of Violence By Emeka J. Otagburuagu 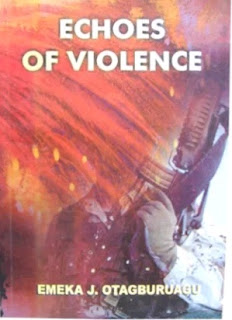 SUMMARY OF ECHOES OF VIOLENCE

The book echoes of violence attempts to properly set a vivid imagery of war on any society beset by it. In this case the village of Alaoma was unfortunate  to suffer war and we saw it through the eyes of our protagonist Onyekwere. Alaoma ( the land of rising sun). they had been humiliated, provoked beyond words and exposed to great torture by their neighbors with whom they had shared common  interests and destiny. The once peaceful Alaoma was subject to a certain kind of pogrom by her neighbors. Their people had been forced out of their homes and made to flee from their neighbors to escape death. Millions of their people who committed no crime other than share the same roof metaphorically with their neighbors. The citizens of Alaoma were sent packing from where they stayed empty handed. They lost everything.

During this act of genocide Onyekwere’s schooling was affected as their school was closed down and academic activities were put to halt. He had to go to Port Harcourt to stay with his elder brother out of fear of being conscripted. In the pursuit of freedom from conscription Onyekwere found his antagonist in the person of his brother’s wife Omerenma. Omerema a woman  who couldn’t tolerate any form of insubordination and whatever she considered competition. Omerenna was quite garrulous and said nothing to compliment anybody. She created scandals with ease. Onyekwere feeling that the time   waiting for the war to be over could be spent or deployed  into doing something more productive, decided to seek his brothers assistance Azuka. Onyekwere’s brother loved his wife so dearly that there were some claims of fetish input of some sought. Onyekwere decided to run his ideas, past  omerema, because if it was approved by Omerenna it was as good as achieved. So Onyekwere decide to present his case in the most pleasing way he could think to omerenma and after he did that omerema began to recount  all the wrongs he and his family had done to her. Omerema swore that nothing would make azuka help his brother Even going as far as feigning rape so as to get onyekwere kicked out of the house. So Onyekwere returned to his parents in the village and narrated his or ordeal  to his parents. Chief Akuma, Onyekwere’s father and a man of high repute in their community. And in his village the war was ongoing so which inadvertently  meant forceful conscription so Onyekwere’s movement was limited. Onyekwere decided to engage himself in livestock farming whilst in the village but he however angered one of the traders who  then put him  up for conscription Onyekwere out of his good heartedness and man who had received the benevolence of death decided to serve in the red cross. And as Onyekwere was serving in the red cross.   Omerenma and he family had relocated back to the village because their city had been overun by enemy soldiers. Out of onyekwere’s persistence and hard work he started gaining prominence and became famous in the vicinity which of course didn’t  go down well with omerenma who started looking for a way to have Onyekwere posted out of which after much talks she succeded.

She succeeded in sending Onyekwere away. Unknowing to her was sending Onyekwere to a better place. A place whose Onyekwere found better fortune and omerenma taking over from Onyekwere which was met with so much anger and they sought  to depose her. After Onyekwere left the relief he was posted to a native village where he met unprecedented fortune.
This native village was Umula but be was later posted to Nchara. Nchara which seemed like a war front had no water had no light no roads. on arrival there he met a man called Ikechi. Onyekwere saw this man as a co-sufferer and offered to help him IKechi had just undergone surgery  and such needed help.

Now the unprecedented fortune was when they got a contract of five million pounds to supply live stocks to the depot but couldn’t do it personally without being conscripted. So they employed the services of Esther their neighbor’s wife as their purchasing and supply agent. They called on Esther and she accepted the idea. She was  given one thousand pounds for  two goats she bought the goat and some fish and supplied them to the s and t depot. Onyekwere went to collect the approved invoice for the supply and the cheque he collected a cheque of €100,000. He and his partner Ikechi: were surprised. This made them multi-millionaires. It was the tenth Sunday since Onyekwere left home and each time Ugoeze his mum saw Azuka or his wife she couldn’t help but remember her son and the fact that his posting outside the village was their doing to meet his untimely death.

The absence of Onyekwere was a vacuum only God could fill so she knelt down to pray. Meanwhile on the omerenma front. Everyone knew the relief camp was onyekwere’s brain child but she summoned all the workers and told them a false story saying it was her husband that worked or establish the camp. Omerenma conceived with a partner and they began stealing relief materials from the camp so that camp director and others decided  to watch them. But on one of their stealing days a boom shell was thrown which landed and killed omerena’s partner. Onyekwere decided to come home after a very eventful trip; his return was meet with so much joy as there were even some doubt about him still being alive.

A Review of the Book History and Philosophy of Science by Dr. Joseph O. Eneh
The war was heated. The enemy troops were smashing the freedom fighters on all fronts. There was a misconception by a woman what thought she has seen a white man unknowing to her that it was their  fellow village man Mr Ubani. Onyekwere was arrested alongside Ubani but was later released by his friend who was a now  a major onyekwere  however came to conclusion  that never fight a war you cannot win. He lamented the effects of war on communities. That it was just a dastardly act. Everyone is affected!

See all Our Book Reviews HERE

Music in Ohafia war dance - An analysis of ikperikpe ogu

RELIGION AND POLITICS: THE DOUBLE CLOG IN THE WHEEL OF PROGRESS OF NIGERIA SOCIAL ECONOMIC ADVANCEMENT